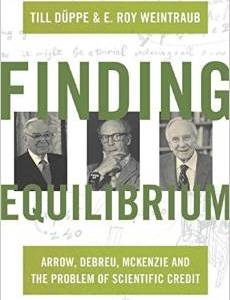 An interesting new book has just been released that deals with one famous episode of the difficulty of assigning scientific credit in economics. Finding Equilibrium by Till Duppe and E. Roy Weintraub deals with the allocation of scientific credit over the proof of the existence of a general equilibrium in a competitive economy. Ken Arrow … END_OF_DOCUMENT_TOKEN_TO_BE_REPLACED

Sadao Nagaoka and Hideo Owan have a new paper entitled "Author ordering in scientific research: Evidence from a scientist survey in the US and Japan." This was one of the papers funded last year. Here is the abstract: This paper examines what drives author ordering in scientific research. We first discuss a theoretical framework for the … END_OF_DOCUMENT_TOKEN_TO_BE_REPLACED

The Nobel prize for physics this year was controversial. It wasn't controversial because of the idea 'wot won it' but the number of people who contributed to that idea. However, the Nobel prize has a rule that there can be at most three recipients in a given year. (That doesn't apply to Peace but it … END_OF_DOCUMENT_TOKEN_TO_BE_REPLACED